A brilliant new video is set to be released on Youtube this lunchtime that reveals the shocking truth about the club owners’ true ambitions for the club.

The Glazer family took control of United in May 2005 when their late patriarch Malcolm borrowed money against the club to acquire a majority share of the company, allowing him to take it into private ownership.

Since then, the Red Devils have seen their league position gradually decline, especially after the great Sir Alex Ferguson stepped down as manager.

United expert Sam Peoples has unearthed compelling evidence that shows that the reason for United’s lack of success appears to be a calculated and targeted approach by the Glazers to simply reach the top four of the Premier League, but not attempt to win it.

Using comparison charts of the club’s spending in the eight seasons before the Glazer take over, the eight seasons under their control when Sir Alex was still manager and the seven/eight seasons since, Peoples establishes a clear pattern of how the American tycoons invest in the squad only if it is needed to qualify for the Champions League.

Peoples will show how, as a PLC and under the directorship of David Gill, the Red Devils were the big spenders and big achievers in the Premier League, beaten only in terms of investment by Chelsea, who changed the landscape with Roman Abramovich.

He then shows how the brilliance of Sir Alex masked a dreadful lack of investment in the first eight years under the Glazers, before revealing the shocking pattern that has emerged since and how the family have allowed nearly one billion pounds to be squandered by the seemingly incompetent executive vice chairman, Ed Woodward. 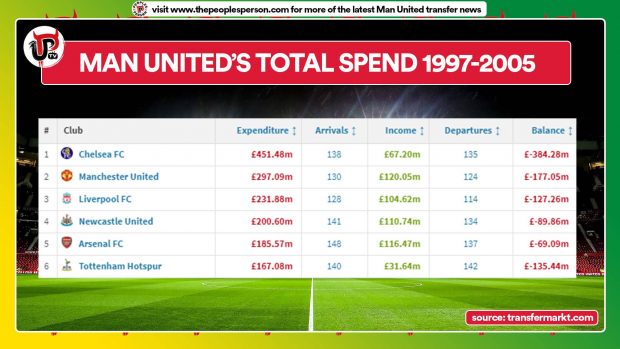 Peoples’ analysis will take the viewer through the financials year-by-year to demonstrate in a clear and concise way the cynical financial approach to transfers and investment that proves the family have no interest in winning silverware or being the best club in England again.

The must-see video will air at 12 noon on the United Peoples TV channel.

Anthony Martial, Marcus Rashford and Mason Greenwood scored over 60 goals between them last season. But how much do you know about other strikers who played for the Red Devils over the years? Take our quiz below to find out.

- October 13, 2020 0
The defender admits the Red Devils have fallen short of their usual standards, but he's confident of a positive response after the international break

‘We will miss out’: United fans want Frenchman now, not later

Photos: Thomas Partey spotted back in Arsenal training ahead of Man...