It is a curious situation in that only Marcus Rashford and Axel Tuanzebe are ruled out due to injury and yet there could be up to 14 other players who might not be able to take part for various reasons.

Paul Pogba has resumed training after testing positive for COVID-19, but it is not known whether he will travel and if so whether Ole Gunnar Solskjaer will deem him fit enough to start the game.

Dean Henderson is likely to finally make his senior debut in goal, having only ever been an unused sub before being loaned out for the past three seasons.

James Garner may be given a chance in midfield ahead of his likely loan move to a Championship side.

Juan Mata has been training at home while completing his quarantine and Aaron Wan-Bissaka has also not been able to train with the rest of the team due to self-quarantining.

Nemanja Matic, Sergio Romero, Phil Jones and Fred haven’t been spotted at training this week and may also been self-quarantining.

Chris Smalling and Marcos Rojo have been training away from the rest of the team and are not expected to travel. This is likely to be due to ongoing transfer negotiations involving the pair.

Luke Shaw and Brandon Williams are fit and have been training. Solskjaer has already confirmed that Shaw will feature in tomorrow’s game.

With all that in mind, here’s our predicted team for the friendly: 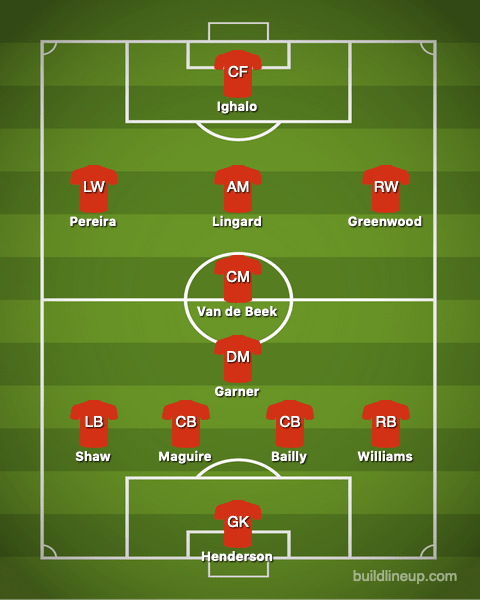 Anthony Martial, Marcus Rashford and Mason Greenwood have scored over 60 goals between them so far this season. But how much do you know about other strikers who played for the Red Devils over the years? Take our quiz below to find out.

- July 12, 2020 0
The Anglo-Nigerian has been in remarkable form for the Gunners this season with his defensive and attacking contributions

‘Alexander-Arnold has made right-back sexy after Neville’ – Carragher hails Gerrard-esque...

Juventus vs Inter to be played behind closed doors due to...

Championship play-offs 2020: Fixtures, dates & teams in the race to...

‘It is not our business’ – Setien worried about Barcelona, not...

Balama: Yanga SC lose another key player for rest of the...

‘There are certainly more players available’ – Inter Miami’s McDonough on...