FC Porto star Alex Telles has agreed a €4 million (£3.7m) per year contract with Manchester United, but the clubs have not agreed a transfer fee.

According to this morning’s edition of A Bola, despite the player ‘keeping a total secret’ of the deal with United that his agent Pini Zahavi has been negotiating, ‘everything leads one to believe that FC Porto’s number 13 will soon become a Red Devil’.

A Bola goes on to say that United’s opening day humiliation against Crystal Palace has made the move for Telles even more pressing, ‘with one of the gaps highlighted by critics being the lack of a left-back capable of creating the volume of attack required by a team that continues to consider itself a contender for the Premier League.’

A Bola claims that the process has progressed rapidly in the last few hours, with United having offered Telles a 5-year contract worth £3.7 million per year, nearly four times his salary at Porto.

Zahavi has told Porto that ‘he is trying to convince the Red Devils to meet the €20 million (£18m) required by Porto to sell the defender.’ 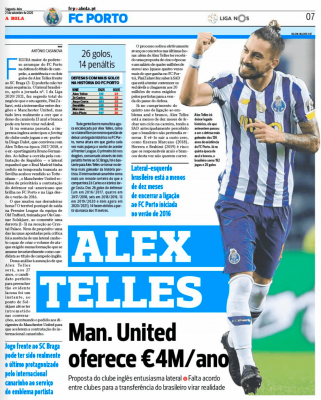 And it is that last piece of information in A Bola’s report that is so frustrating for Manchester United fans. Porto have slapped a ridiculously low, take-it-or-leave-it price on the player to expedite a quick sale in this window. But instead of just paying up and moving on to the next deal, United’s negotiators Ed Woodward and Matt Judge think they smell blood and are going to low-ball the Portuguese side, thinking they are desperate enough to trim a couple of million off the price.

That may be possible, it may not; but the inept pair’s insistence on this painful form of negotiating to save a couple of million delays the acquisition of a player vital to the team, it distracts and delays them from completing other transfer business and it leaves the door open for another club to swoop in and steal the player from under their nose.

The latter danger could come in the form of Paris St German on this occasion, who had lined up Telles – at a significantly higher price – to replace Layvin Kurzawa before COVID-19 struck and who now find themselves without any left-back due to the Frenchman’s suspension and Juan Bernat’s cruciate ligament injury.

Manchester United’s new star Donny van de Beek is the 13th Dutch national to play for the senior side. But how much do you know about the other 12? Take our quiz below to find out.

Best in the league: Man United star has blitzing start to the season

Premier League restart: Fixture dates, teams & how to watch on...

‘What a night!’ – Chama reacts after dominating Awards Gala on...

‘We were exposed until the last moment’ – Godin criticises Serie...