Ole Gunnar Solskjaer’s Manchester United team selections in recent games have been surprising and unpredictable to say the least.

Since the 6-1 drubbing against Spurs, the manager has opted for a Fred – McTominay midfield partnership, as opposed to giving starts to the likes of Paul Pogba and Nemanja Matic.

He has stuck by the likes of David de Gea and Harry Maguire when many called for them to be dropped after some indifferent form.

Solskjaer has also recalled the likes of Juan Mata and Dan James to the team and resisted the urge to start new signings Donny van de Beek and Alex Telles in the Premier League.

The result has been that the Reds have not lost any of their three games since that humiliating Spurs result. So have the ends justified the means? Is this brilliant management by Solskjaer or has he got away with a little bit of murder?

Harry Maguire is a case in point. The boss has put him straight back into the team, dismantling a defence that was simply brilliant against PSG. United kept a clean sheet, so in a sense Solskjaer was vindicated. But the fact is that even the most die-hard United fan would admit Maguire was extremely lucky to have escaped conceding a penalty when he held down Cesar Azpilicueta in the box.

If he had conceded that penalty, his selection would have been a decision that had backfired badly on the manager.

McTominay and Fred are doing their jobs well enough, but neither of them are able to create. Mata’s selection was understandable after two good performances recently, but to play him on the right wing when Mason Greenwood is sitting on the bench beggars belief.

David de Gea has shown signs he is back to his best this season but the jury is still out on that one and we need more time to feel safe about his selection. Dean Henderson was (presumably) kept at the club with the idea of giving him a chance to stake his claim and yet has only been given starts in the Carabao Cup like some young 18-year-old academy star. On both occasions he kept a clean sheet.

Henderson is a proven Premier League goalkeeper. If he is to be kept at the club, he should be given his fair share of games in order for him to continue his development.

Solskjaer admitted last season that Marcus Rashford’s back injury could have been caused in part by overplaying him. Rashford has played all 90 minutes of all United’s Premier League and Champions League games so far this term and appeared as a sub in both Carabao Cup games. At this rate, especially with all that tweeting to do, Rashy will be exhausted by Christmas.

Bruno Fernandes – one of the few names on the teamsheet that absolutely ought to have been there – was spotted pointing to Luke Shaw to make an overlapping run yesterday, to no avail. Would new signing Alex Telles have needed to be told? There are no fitness issues with Telles, who was playing regularly for Porto before he signed on deadline day. So why is he not in the side?

As for Daniel James, few people seem to understand why on earth Solskjaer would put a player devoid of confidence, form and possibly, let’s face it, ability, into the starting eleven to face a top six rival?

In fact, of the squad players who were available for selection yesterday there is an argument that an eleven made up of the non-selected players looks stronger on paper than the eleven that the manager did select. 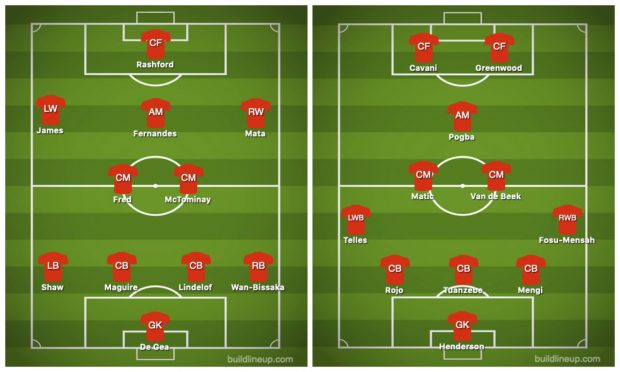 OK, admittedly that back three looks highly experimental but if these two sides were playing each other, which one would your money be on?

Of course, most of us would have started with an eleven based on players from both of these sides. But yesterday’s choice by Solskjaer seemed unduly negative and defensive and possibly unduly loyal to certain players.

It is a long season for sure and no doubt the changes will come. But how far behind their rivals will United be before Ole’s easing-in process is complete?

This summer’s transfer window has been one of the strangest in living memory. So cast your mind back to less stressful days and test your knowledge of past United arrivals and departures in our quiz below.

‘It would be an upset’: Solskjaer plays down United’s chances of beating Liverpool

Scholes explains what United must do to beat Liverpool on Sunday

Solskjaer explains what Van de Beek must do to get more...

- January 9, 2021 0
Ole Gunnar Solskjaer has once again responded to questions about Donny van de Beek’s lack of game time at Manchester United. The manager was...

‘It’s my responsibility and duty’ – McKennie says he’ll continue to...

Tanguy Ndombele determined to stay and fight for place at Tottenham...