An overnight report that Manchester United have made a formal offer for Cristiano Ronaldo has been contradicted by the same outlet that made it.

There has been growing speculation that Juventus are looking to offload Ronaldo in June due to the need to reduce their wage bill.

In this morning’s paper edition, Portuguese outlet Record claimed that both United and PSG are circling like ‘sharks’ around the former Red Devil and that United have already taken steps to bring about his return to the club.

‘CR7 has already been informed of the existence of the invitation and is reflecting on the possibility of returning to the club he served between 2003 and 2009 and with whom he won nine trophies, including three Premier League titles, one Champions League and a World Club Championship.’ 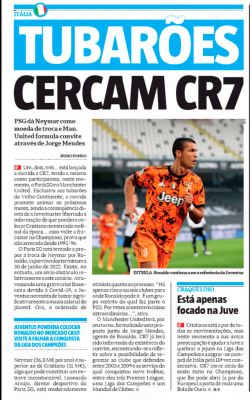 However, after the British media went into meltdown over Record’s claims this morning, the same outlet reported this afternoon on its website that it was the English media who had started all the commotion.

‘In England there is talk of a possible return to Manchester United, but there are those who point to another destination for the striker, should he decide to return to the Premier League,’ the outlet said – without even blinking.

‘Watford striker Troy Deeney believes that the captain of the Portuguese national team could move to Wolverhampton, a club that in addition to being coached by a Portuguese, and having eight Portuguese players, has good connections with Jorge Mendes, Ronaldo’s manager.’

It is a strange about-turn by Record and when a newspaper contradicts its own story, it is probably fairly safe to assume that there cannot have been much truth to it in the first place.

United have had some world class goalkeepers over the years and some entertaining ones too. Take our quiz below to find out how much you know about United’s number 1’s, past and present.

- February 24, 2020 0
Could Hirving Lozano join Everton? Will JJ Macias move from Chivas to Spain? Where will Mexico play in 2020? Goal summarizes the transfer talk

Shkodran Mustafi opens door to long-term Arsenal stay on back of...

‘Henderson’s time at Manchester United will come’ – Goalkeeper urged to...

Man Utd need a better goalkeeper than De Gea to be...